Club Garibaldi held on to the Aldo Cuccurullo Memorial Trophy, but only just, in the annual soccer clash held this year in sunny conditions at Neale Park in Nelson. It was a courageous draw, given we only had two subs compared to Club Italia's 5 or 6, and our dearth of fresh legs was compounded by a head injury to defender Paul Muollo, which saw him have to leave the field for hospital after only 20 minutes!

Nelson enjoyed a wealth of possession, and undoubtedly would have made it count had it not been for some resolute defending, and some wonderful goalkeeping from Club Garibaldi's Jan Chmielewski. It was quite appropriate, given the particular ethnicity of the contestants, a commendable expression of 'catenaccio' from Garibaldi, and we defended with quiet desperation, knowing that a draw was sufficient to retain the Cup. Player of the day for Nelson was the ever-industrious midfielder, George Molnar, and for Club Garibaldi, the guy most responsible for keeping our net a goal-free zone, goal-keeper Jan Chmielewski.

After the game we enjoyed the marvellous hospitality of the members at Club Italia, where we enjoyed a sumptuous feast in their fantastic new courtyard; where a giant pizza oven delivered platter after platter of the most mouth-watering pizza! On Sunday evening we were generously hosted by Francis Monopoli at Monopoli's Bar, and in the course of the evening, both Clubs agreed that future Aldo Cuccurullo Trophy games which end in a draw would be decided by extra time and penalties, as we think this will enhance the entertainment of the fixtures for players and spectators alike. Club Italia wondered whether the rule could take immediate effect, with a penalty shoot-out in the garden bar to decide this year's result, but personally, I valued my life too much to float that idea with the team hehehe! The club's team would like to express their appreciation and gratitude to Maria Colucci and Lisa Devitt for organising so many aspects of the exercise, to Antonio Cacace and Club Garibaldi for so generously contributing towards the funding of the trip. We greatly look forward to hosting Club Italia in Wellington in 2010. 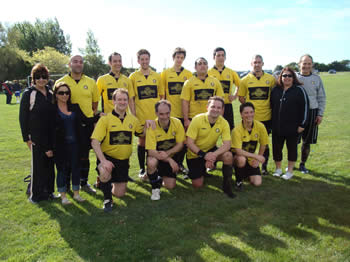