by By Michael DeGregorio 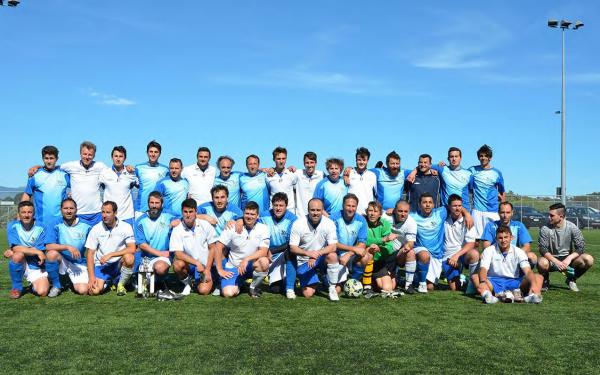 Fantastico! The Aldo Cuccurullo Memorial Trophy will now spend the next 12 months (and longer we hope) housed in the Club Garibaldi clubrooms following our 1-0 win in the 20th annual football game against Club Italia.

This was Club Garabaldi’s first win since 2008 and sees the return of the trophy to Wellington after five long years. It is fair to say, the team, Club and their supporters were pleased to see the trophy return.

The game was played in typical Wellington conditions, beautiful sunshine with a slight northerly breeze. We started the game brightly with Raffaele, Anton, Giancarlo bossing the midfield and Luciano closing their defenders down. On the flanks we started with Carlo on the right and Matt on the left. Across the back we had Dave, Michael, Paul and Antonino with Jacques in goal. The team was a good mix of experience and youth. In the first 20 or so minutes we created some chances to open the scoring but were unable to take advantage and were generally solid(-ish) at the back apart from the odd time that Joe Lupi used his blistering pace to get in behind the defence. In the second 20 or so minutes of the first half Club Italia started to get more into the game and had some good chances to score but fortunately for us they failed to capitalise on them. At the end of the first half the score was nil all.

In the second half we played into the breeze, but given our fitness, number of subs and youth, this wasn’t going to pose too much of an issue. Again, the game flowed from end to end and while the commitment was abundant (e.g. crunching tackle from Dion on George), it lacked a little bit of quality. We finally broke the deadlock midway through the second half via a nice finish from Luciano after a splendid pass from Dion.

1 nil up with 25 minutes odd minutes to go, was it too early for catennaccio? We’ve been in this position before – (remember last year) so knew we had to keep playing until the final whistle. After some nervous moments towards the end of the game, including a lovely run from George Molnar (again reminiscent of last year) that was brilliantly intercepted by Giancarlo, we held on and secured our win.

Queue, start the celebrations – for some long into the night.

While it was great to secure the win (and keep Dominic Palumbo quiet for about 10 minutes) the result was secondary, as it is day to get together with our friends and family from Nelson to celebrate our shared heritage and the sporting spirit of a young man. It was wonderful to see two of the original players from the 1995 game – Francis Miccio (only person to have played in all 20 games) and Tony Moreno – attend the celebrations and cut the anniversary cake.

While the day was superb, there were some familiar faces missing this year including PJ Lupi and we look forward to catching up with them in Nelson next year.

On behalf of the team, I would like to thank Club Italia, Francis, George and their players and all the supporters who joined us from Nelson. I would also like to thank Club Garibaldi, Linda & John De Gregorio, Dave Da Vanzo, Tony Volpicelli, Maria Colucci, the Garibaldi players and all those that provided food on the night. A special mention about the amazing team in the kitchen at the Club – your efforts are truly appreciated. And finally our thanks to all the supporters from both clubs, for making this another memorable day to celebrate a fantastic individual and maintain that special bond.