The Clubrooms will be open at 2.00pm and the Remembrance Liturgy will begin at 2.30pm. We are honoured to have Monsignor Gerry Burns, the Wellington Archdiocese Vicar-General, leading the Service. Following the Liturgy, we will enjoy tea, coffee and some treats...

Each year Club Garibaldi and Club Italia of Nelson interact through a soccer game between representatives of the two clubs. The game is in memory of Aldo Cuccurullo, a young member of Club Italia who tragically died at a very young age.

Aldo was known as a gentle giant who gave of his time not only to play rugby league himself but also to coach children.

The game is played on the Saturday of Labour weekend and, as you would expect of Italian football, is a tense game. Member supporters of each club travel to be at the game but the weekend is as much an opportunity to socialise and build friendships as it is to play football.

In 2007 the 13th annual challenge game will be held in Nelson, hosted by Club Italia. Games in Nelson are usually played at Neale Park and in Wellington at Memorial Park, Petone.

Over the years the two teams have featured many fine players who have played central and southern league football. Ages of players have ranged from 15 to 48 (maybe older!) and skill levels have been as variable. Rolling substitutes are provided but the game is controlled by experienced referees and linesemen.

After the game a celebration dinner is held at the host's clubrooms with a wide array of fine Italian food served to hungry players and supporters. The challenge trophy is presented to the winning captain by one of Aldo's brothers. 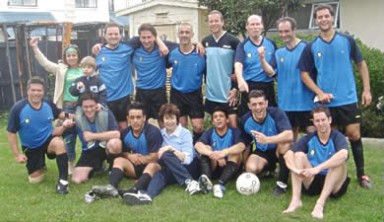 Past Results and Goalscorers (Word 26KB)