The Clubrooms will be open at 2.00pm and the Remembrance Liturgy will begin at 2.30pm. We are honoured to have Monsignor Gerry Burns, the Wellington Archdiocese Vicar-General, leading the Service. Following the Liturgy, we will enjoy tea, coffee and some treats...

Club Garibaldi started well and showed a lot of verve in attack, asking lots of questions of the Club Italia defence. One of our debutantes, Gianni Di Leva, was proving extremely hard to contain, as he attacked with speed at every opportunity.

Gianni’s forceful manoeuvres soon led to our taking the lead, when he sped into the box and unleashed a powerful drive into the far corner of the net.

Club Italia were a little bit shocked to be behind at such an early stage, and their attacking play was tempered somewhat by concerns of falling further behind. 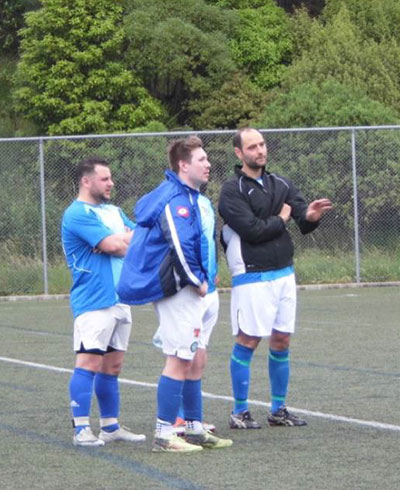 Just before half-time however, Club Italia were awarded a free kick when Joe Lupi was adjudged to have been fouled on the edge of our box

Club Italia’s player of the day, Sean Parks, executed a superb free-kick into the far corner of the net, and the whistle sounded immediately after for half-time.

In the second half, we were forced to defend a lot more, as Club Italia pushed forward in search of the lead, with Sean Parks carrying the ball quickly towards our back four at every opportunity.

Club Italia went close to taking the lead, but great goal-keeping from Antonino De Gregorio luckily kept them at bay.

The full-time whistle sounded with the scores locked up at 1-1, and it was time for penalTEASE.

We lost the penalty shoot-out last time we played Club Italia in Wellington, and perhaps ominously, the penalties were taken at the same end of the ground that we came up short at 2 years previously.

Club Garibaldi captain, Paul Muollo, courageously took our first penalty, and, unsurprisingly, dispatched the ball into the net with calm aplomb, giving the keeper no chance.

Gianni Di Leva was on the spot again, and smashed his penalty home to keep things neck and neck in the shoot-out.

The drama was not about to let up though, and the penalty shoot-out progressed into the sudden-death phase, in which the game was decided if one team missed, and the other team scored.

We were first to miss during sudden death, but as luck would have it, we did not die suddenly, as Club Italia also then missed.

Francesco Cantoni Copettithen drilled the ball into the corner of the net to put the heat back on Club Italia.

Club Italia could not even things up with their next kick, and Club Garibaldi was successful in holding the Aldo Cuccurullo Memorial Trophy for the first time since 2016.

A delightful dinner was put on at Club Garibaldi in the evening, and it was very well attended.

A big thank you to Linda De Gregorio for all her positive energy and support, and to all who helped out and made this such an enjoyable event.

We look forward to heading down to Nelson next year and playing in the 25th Anniversary edition of the Aldo Cuccurullo Memorial Trophy match.